About 15 hours of voting did not deter them — they waited, kept wake, determined to cast their ballots for their preferred candidates.

The first time the National Democratic Congress (NDC) expanded its electoral college came with challenges but which were not insurmountable.

When they surmounted, the voting process went beyond Saturday and into Sunday, but the delegates showed determination and readiness to put the party structures in place for the 2020 general election.

Some 9,350 delegates and 7,850 observers, bringing the total to 17,000, thronged the venue for the congress at La in Accra to decide the fate of some 65 individuals vying for 10 national executive positions.

And when all had been said and done, Mr Samuel Ofosu-Ampofo was elected the National Chairman of the NDC with 3,656.

He beat a former Trade and Industry Minister and former NDC MP for Keta, Mr Dan Abodakpi, who obtained 2,199 votes; a former Attorney General and current Vice-Chairperson of the party, Mrs Betty Mould-Iddrisu (363); a businessman, Mr Daniel Anang (307), and Alhaji Huudu Yahaya (1,827) to clinch the topmost position of the party.

Mr Ofosu-Ampofo previously served as National Organiser, Vice-Chairman and Director of Elections for the NDC.

During the administration of the late President J.E.A. Mills, Mr Ofosu-Ampofo served as the Eastern Regional Minister and later as the Minister of Local Government and Rural Development.

Popularly referred to as Braa Sammy Fotoo, he supervised Election 2016 for the NDC as its director of elections.

With regard to the position of National Vice-Chairman, Chief Sofo Azorka, Sherry Ayittey and Alhaji Said Sinare won the three slots.

In the contest for the position of General Secretary, Mr Johnson Asiedu Nketiah, the incumbent, maintained his position as the chief scribe of the party. He garnered 6,644 votes to beat Samuel Koku Sitsofe Anyidoho, who obtained 1,655 votes.

In his address, former President Rawlings advised the party to listen to itself as it prepared for the 2020 elections.

For his part, former President Mahama accused President Nana Akufo-Addo’s government of becoming a clearing house of its corrupt officials.

After the initial opening ceremony, the party plunged into business to amend aspects of its constitution that had to do with the date for the election of a flag bearer, the adoption of a special national conference (SNC) and the creation of a presidential advisory committee (PAC).

Therefore, considering the short period between the congress and the election of a flag bearer, it seemed improbable that the December 7 date would be appropriate, hence the need for an amendment.

What that means effectively is that the National Executive Committee (NEC) will now meet to decide on a new date for the holding of the flag-bearer elections. 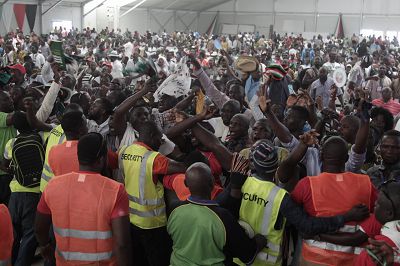 For the adoption of the Special National Conference (SNC), the position of the party was that it had observed that it was becoming increasingly difficult to always organise congresses to deliberate on certain matters of importance without recourse to voting.

The explanation was that as things stood currently, every time that the party had to call a congress, there was always an element of voting and for that matter it was unable to call congresses to deliberate on issues of policy and programmes and also consider crucial constitutional amendments.

Under the new provision, the National Executive Committee (NEC) of the party would be the body to call a SNC by notice at a place and on a date it determines and will also determine the delegates and all persons who are qualified to attend.

In selecting delegates for the SNC, the NEC will take cognizance of the various stakeholder interests in the party in order to reflect a national spread.

Among the mandate of the SNC will be the discussion and adoption of amendments to the party’s constitution, discussion of policy issues affecting the development and direction of the party, particularly its policies and programmes, and approve the annual reports and policy recommendations proposed by the NEC and others.

The third amendment was for the creation and adoption of a Presidential Advisory Committee (PAC) to moderate the relationship between the party and the presidency.
According to the provision, at the beginning of the President’s tenure, the PAC would be established to be composed of not more than 13 members, with at least three of its members being women.

The amendment indicated that the committee would be constituted as soon as the party was voted to assume government and it would serve as a liaison between the Executive and the party.

“It shall  also provide the platform for the discussion of general matters regarding the forging of a strong relationship between the party and the Presidency and the committee would offer advice to the government in relation to the appointment of key state officials.

Majority of delegates who attended the congress, especially those from far, attributed the delay in the process of the elections to poor organisation.

Clearly peeved and fatigued delegates said officials should have quickly expanded the voting centres from the existing five to at least eight when the crowding began to mount.

They also suggested that delegates from distant locations such as the three regions of the north should have been made to vote before those who were closer.

Some other challenges were that some regions were not organised as and when they were called and that also delayed the process.

The ramification for the delay for those from afar was that drivers who conveyed them to Accra were demanding extra charges for the additional hours spent in Accra.

Some delegates who wished to stay till counting and declaration of results said they were worried that they had to return to their origins due to the delay.

Those who chose to stay had to deal with the challenge of having to pay an extra day at the hotels where they lodged.

For those who could not afford to pay for the extra cost of lodging they had to check out of the hotels and carry their luggage with them to the Accra International Conference Centre.

Also, security at the congress venue was lax as of yesterday, in pale comparison to last Saturday’s when there was a very tight security that would not permit entrance to anyone without accreditation.