The 2011 winner of TV3’s Ghana’s Most Beautiful beauty pageant and General Manager of Angel TV in a post on her official Instagram page sighted by MyNewsGh.com on Sunday November 11 claimed she had learnt her lessons and she thinks it’s time for her to walk away.

The post read ‘Sometimes you just have to learn how to walk away. When it’s not making you happy and it’s rather stressing you take a bow. My marriage of eight years is over. I won’t give anyone the right to take away my happiness. I’m walking from everything that is stressing me.’

Although the post has been deleted, it lasted on her timeline for almost an hour as MyNewsGh.com observed. 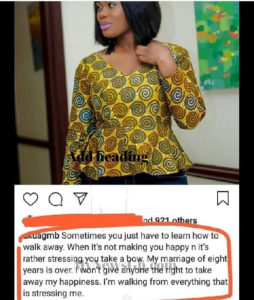 It is unclear as to what might have led to the breakup but if her post is anything to go by, then it means the beauty queen has been unhappy in her marriage for a while which contradicts her previous comments two months ago on Zionfelix’s Celebrity Ride Show monitored by MyNewsGh.com which the TV presenter echoed that she’s happy in her marriage.

Detailing what made her marry the Angel Group of Companies boss, Sally told Zionfelix the show host that love is the major factor. She added that Dr. Oteng is one humble human being that any individual would want to hang out with so it was easy for her to say yes when he proposed marriage.

The mother of two on the show debunked rumour that her pregnancy facilitated their marriage. She revealed that she gave birth before marrying the Millionaire so there was no iota of truth in the hearsay that her spouse was pushed to marry her due to the pregnancy.