The beloved owner of Leicester City Football Club died in a helicopter crash on Saturday near the club’s stadium in Leicester, England, the club said Sunday.

Thai billionaire Vichai Srivaddhanaprabha, 60, was one of five people on board the aircraft when it burst into flames after crashing in a parking lot next to King Power Stadium, the club said. No one on board survived.
“It is with the deepest regret and a collective broken heart that we confirm our chairman, Vichai Srivaddhanaprabha, was among those to have tragically lost their lives on Saturday evening when a helicopter carrying him and four other people crashed outside King Power Stadium.”
The statement described the chairman as a “a man of kindness, of generosity and a man whose life was defined by the love he devoted to his family and those he so successfully led.”
A book of condolences will be opened at the King Power Stadium starting at 8 a.m. on Tuesday, October 30, the club said. 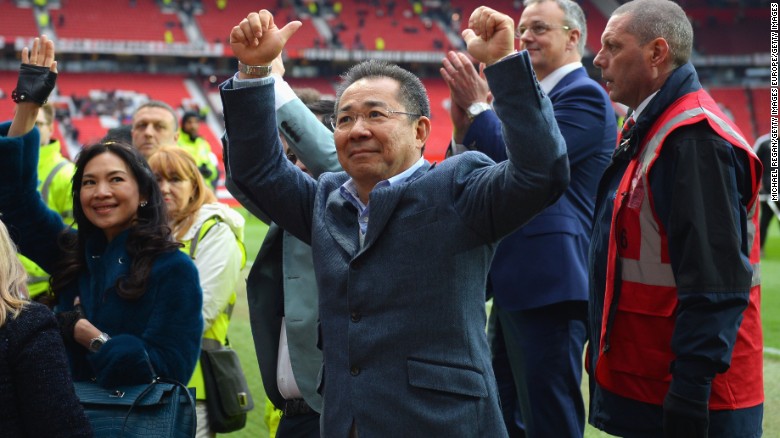 Vichai Srivaddhanaprabha cheers after the Barclays Premier League match between Manchester United and Leicester City in 2016..

Srivaddhanaprabha’s helicopter was a familiar sight at the Leicester stadium, landing in the middle of the pitch to ferry its owner to and from home games.
The crash occurred about an hour after Leicester City’s match against West Ham on Saturday night. Witnesses said the helicopter had barely cleared the 25 meter (82 foot) high stadium walls before making a loud noise, crashing to the ground and igniting in a large fireball.
Distraught fans set up a makeshift memorial for the owner before official confirmation that he was on the flight.
As day broke Sunday a shirt adorned with the badges of Leicester City and Oud-Heverlee Leuven — the Belgian second-division team also owned by Srivaddhanaprabha — was propped up against the King Power Stadium, along with a framed picture of the Hindu deity Ganesh and a handful of flowers.
On a bitterly cold day, people of all ages — some pushing babies in pushchairs — flocked to the stadium to lay scarves, flowers and Buddha statues outside the ground.
Those scarves weren’t just the blue and white of Leicester City. There were West Ham, Liverpool and Aston Villa scarves as well as a Sporting Lisbon one.
“We witnessed a miracle,” said Leicester fan Sam Tewley, 31, as he reflected on the unlikelihood of Leicester winning the Premier League in 2016 under Srivaddhanaprabha’s ownership. He noted the goodwill Srivaddhanaprabha built through charitable acts, including a $2.5 million donation to Leicester’s hospitals.
“He has brought the city together,” Tewley said. “He did something to this city that changed the mindset. Walking around the town center in 2016 everyone was so happy.”
Russell Bentley, who works as a volunteer for the The Street Pastors initiative, arrived late in the morning at the stadium to help congregating supporters and said he would stay until he “wasn’t needed anymore.” He also credited Srivaddhanaprabha with reversing the team’s fortunes.
“It looked touch and go for Leicester City at one stage,” Bentley said.
“The club was in administration and he came in, bought it all, paid off all the debts. Not just took it over because it was a cash cow, but because he wanted to be part of the Leicester support.”

The confirmation came one day after Leicester City released a short statement saying that it was assisting police with a “major incident” near the stadium.
As images and video spread online of flames leaping from the crash site, Leicestershire Police set up a cordon at the end of the stadium where the crash took place.
The UK government’s Air Accidents Investigation Branch published a statement that it would be sending a “team of inspectors” to the stadium to investigate the crash.

Srivaddhanaprabha bought the club for $57 million in 2010 and it was promoted to the Premier League in 2014. In 2016, the club achieved the once-unthinkable feat of winning the premiership.
It went into the 2015-2016 season with odds of 5,000-1 to win but stunned fans, and bookmakers, by taking the title.
The club’s extraordinary run of success played out under Srivaddhanaprabha’s ownership. Along with handing fans their first top-flight title in the club’s history, the businessman won over fans by handing out free beer, water and cupcakes, as well as scarves in cold weather, in the stands. 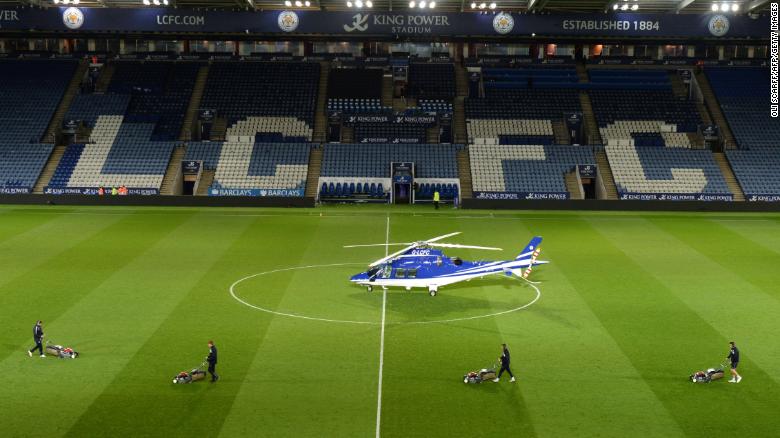 This file image shows the helicopter reportedly owned by Vichai Srivaddhanaprabha.
The Thai was No. 388 on the Forbes’ billionaires list, with a net worth of $4.9 billion. He made his fortune through the creation of the King Power chain of duty-free stores, Thailand’s largest. Srivaddhanaprabha’s company sponsors the team’s stadium.
The crash occurred about one hour after Leicester City drew 1-1 against West Ham United on Saturday night.
Several Leicester players tweeted their condolences. Striker Jamie Vardy and defender Harry Maguire tweeted the “praying hands” emoji. Ozil laughs off Souness’ ‘absent in games’ criticisms: I listen to people who say things to my face!