At the end of a week in which 10 suspected pipe bombs were sent to prominent liberal leaders over a 72-hour period, President Trump took to Twitter past 3 a.m. Friday to criticize CNN, another recipient of a suspicious package, for coverage that he said compared this week’s news to 9/11 and the Oklahoma City bombing. 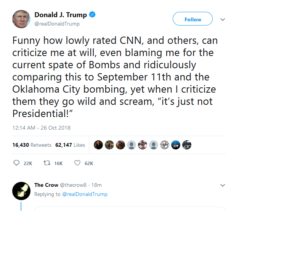 “Funny how lowly rated CNN, and others, can criticize me at will, even blaming me for the current spate of Bombs and ridiculously comparing this to September 11th and the Oklahoma City bombing,” the president tweeted at 3:14 a.m., “yet when I criticize them they go wild and scream, ‘it’s just not Presidential!’ ”

The 3:14 a.m. tweet, which was posted after an incomplete version of the tweet was published about 30 minutes prior and then deleted, comes in the same week that the president both condemned the pipe bombs and again targeted the media for the coverage of his administration.

“The media also has a responsibility to set a civil tone and to stop the endless hostility and constant negative — and oftentimes, false — attacks and stories,” Trump said at a Wednesday night rally in Wisconsin.

In the hours that followed the discovery of a live explosive device at CNN’s New York headquarters on Wednesday, Jeff Zucker, the company’s president, denounced Trump and his administration for not grasping the consequences that come from their attacks against the media.

“There is a total and complete lack of understanding at the White House about the seriousness of their continued attacks on the media,” Zucker said in a Wednesday statement. “The President, and especially the White House press secretary, should understand their words matter. Thus far, they have shown no comprehension of that.”

For the president, CNN — a cable news network he once said he doesn’t watch — remains a favorite topic on Twitter. Since June 16, 2015, the day he announced his candidacy for the Republican presidential nomination, the president has tweeted about CNN more than 260 times, according to the Trump Twitter Archive, a website that archives Trump’s tweets. Sixty-five of those tweets have come since Trump assumed office.

Tensions boiled between CNN and Fox News as the networks each tore into the other for its coverage of the latest bomb threats. (Drea Cornejo /The Washington Post)

Meanwhile, on Fox Business, Lou Dobbs, who has enjoyed steady praise from the president, tweeted out a segment from his Thursday interview with conservative activist Candace Owens, in which Owens scolded CNN for preaching “dishonesty” in its coverage of the suspected pipe bombs. “Now they want to point the finger at this administration, which has been trying so hard to bring the American people together despite the media slandering them,” Owens said.

Trump has often described CNN on Twitter as “so negative,” “disgusting,” “the worst,” “failing” and, of course, “Fake News.” His most famous CNN-related tweet, in July 2017, depicted him violently smashing a CNN logo attached to the head of Vince McMahon, chairman of WWE.