The march comes after another tumultuous week for Prime Minister Theresa May in which she failed to agree a divorce deal with EU leaders in Brussels and infuriated members of her own party by making further concessions in the talks.

Hundreds of thousands of supporters of the European Union marched through London on Saturday in the biggest demonstration so far to demand that the British government holds a public vote on the terms of Brexit. The protesters waved the blue and gold flag of the EU and held up “Bollocks to Brexit” banners under sunny skies to call for another referendum on the eventual deal on how Britain will leave the world’s biggest trading bloc.

The march comes after another tumultuous week for Prime Minister Theresa May in which she failed to agree a divorce deal with EU leaders in Brussels and infuriated members of her own party by making further concessions in the talks. With just over five months until Britain is due to leave there is no clarity about what a future trade deal with the EU will look like and some rebels in May’s Conservative Party have threatened to vote down a deal if she clinches one.

James McGrory, one of the organisers of the march, said voters should have the chance to change their minds because the decision will impact their lives for generations.

“People think the Brexit negotiations are a total mess, they have no faith in the government to deliver the promises that were made, partly because they cannot be delivered,” he said.

At the march, demonstrators carried placards saying “Brexit is pants”, “Time for an EU turn” and “European and proud.”

Organisers said about 670,000 people took part in the march, which would make it the largest in Britain since a demonstration against the Iraq war in 2003.

The “People’s Vote” campaign, which includes several pro-EU groups, said they had stewards stationed at regular intervals to estimate the size of the crowd. The police did not provide an independent estimate of numbers participating.

Protesters originally gathered near Hyde Park and then walked past Downing Street and finished outside parliament where they listened to politicians from all main political parties. 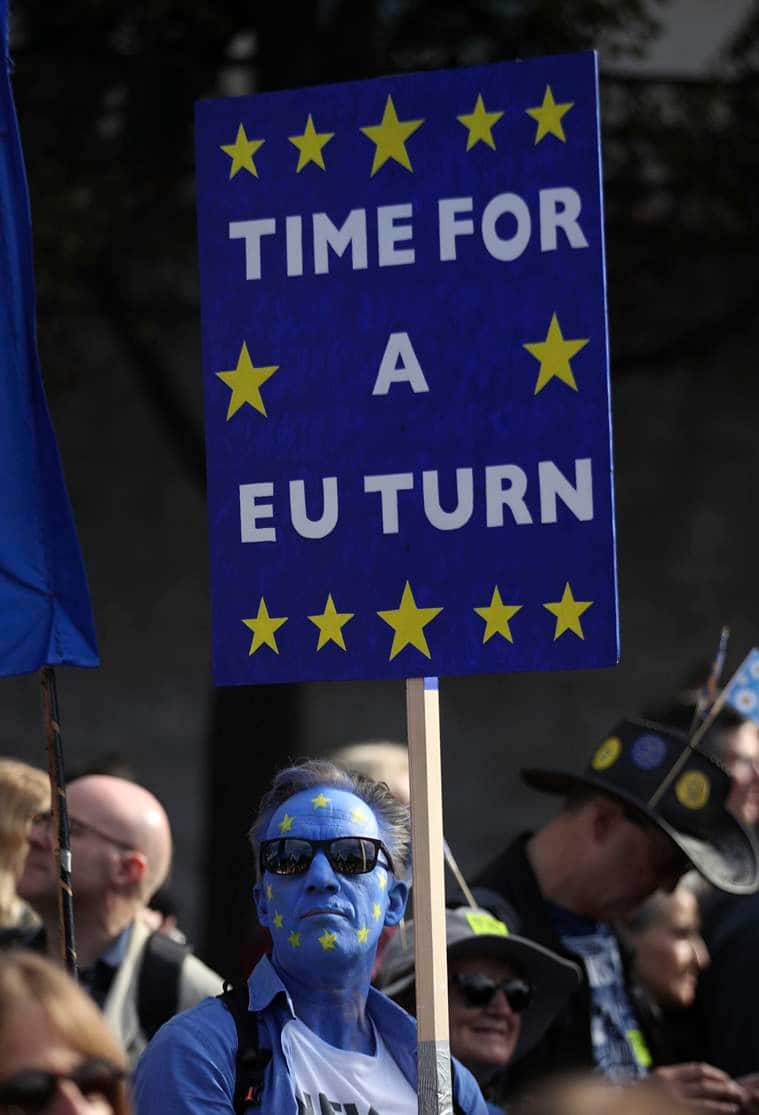 An anti-Brexit campaigner with his face painted in the colours of the European Union flag, during the People’s Vote March, in London. (Yui Mok/PA via AP)

Britain’s 2016 referendum saw 52 per cent vote in favour of leaving the European Union. But the past two years have been politically fraught as the government has struggled to agree on a plan and there are fears that Britain could leave the bloc without a deal.

Some opinion polls have shown a slight shift in favour of remaining in the European Union, but there has yet to be a decisive change in attitudes and many in Britain say they have become increasingly bored by Brexit.

The prime minister has repeatedly ruled out holding a second referendum. The opposition Labour party’s Brexit spokesman said last month his party open to a second referendum with the option of staying in the bloc in certain circumstances.

In Belfast in Northern Ireland, around 2,000 people gathered on Saturday to oppose Brexit.

Brendan Heading, a 39-year-old IT worker, said he was worried the decision to leave the EU would damage the economy and could lead to the break up of the United Kingdom.

“I feel that Brexit threatens prosperity and stability,” he said. “People should have the opportunity to vote for an alternative based on what we now know.”

Brexit supporters held their own rally in the town of Harrogate in the north of England.

Richard Tice, Vice-Chairman of Leave Means Leave and one of the speakers at the event, described the people on the march in London as “losers” and said a second referendum would trigger a constitutional crisis.

“We had a vote, we voted to leave, the idea to have a second referendum would be incredibly damaging,” he said.

“People need to be under no illusions as to how people feel about what is a significant potential for a total betrayal of democracy in this country.”