Why nearly half of Africans don’t trust elections Threats, bribes and stuffed ballot boxes may sound like a political drama, but these are all real issues that Africans face during national elections, a public opinion study has revealed.

The results, published by pan-African research institute Afrobarometer paint a dire picture of trust in the democratic process on the continent, where less than half (44%) of people across the 36 countries surveyed say they trust their national electoral commission only somewhat or a lot.
People in countries with upcoming elections, or who have had elections recently, expressed some of the lowest levels of trust, says lead author Peter Penar, a researcher and lecturer in political science at Michigan State University.

Take Gabon for example, which has seen post election protests and unrest this month after opposition leader Jean Ping lost by less than 6,000 votes.
There, 51% have no trust at all in their election commission, and a mere 25% say they trust them a lot or somewhat.
“Those are all very alarming numbers and, it shows an extreme lack of confidence,” Penar says.
The survey was based on face-to-face interviews with between 1,200 and 2,400 people in each of the 36 countries.
While individuals’ responses are not published, the researchers have identified a number of key factors contributing to the lack of trust.

A history of vote manipulation entrenched in people’s memories, lack of transparency of election monitoring bodies and corruption all influence people’s trust in the system and many are afraid when casting their vote, the researchers found.
But what worries people the most is the counting of votes, Penar says, with 38% of Africans believing votes are only sometimes, or even never counted.
Vote counts can be tampered with in many ways, according to Penar.
“[This happens] at the polling stations. Stuffing ballots, double voting, multiple voting.”
Methods for swaying voters may also include threats, actual violence and bribery.

How much for your vote?

Bribery is commonplace in some countries, the study showed.
The practice is illegal, and so rather than asking people whether they have accepted bribes, researchers posed the more indirect question of how often people in the country face bribery around election time.
On average, 43% of Africans said people are often or always bribed, with nearly 70% saying voters were bribed at least sometimes.
Some countries returned startlingly high numbers. In Mali, 78% of people said voters were often or always bribed, and in Senegal the figure was 68%.
The bribes may range from giving a little money at the polling stations to being offered seeds or medicines during campaigns, Penar says.

Threats of violence at the polls

Voter intimidation is also key, the researchers found, with 44% of those surveyed saying they are sometimes, often or always threatened with violence when voting.
“That’s incredibly high,” says Penar.
“This makes people afraid of going to the polls and expressing an autonomous and personal choice of who they want to win.”

Among the most surprising findings, according to Penar, was the lack of trust in Ghana, which goes to the polls in December this year.
“We think of Ghana as a country that’s really improved in terms of electoral competition and having alternation of power.”
Still, 37% of Ghanaians say they don’t trust the national electoral commission at all.
The picture looks different across the Atlantic. A 2016 Pew study showed that 78% of US citizens are confident, or very confident, that their vote will be counted fairly in the upcoming election.
In Africa, the Afrobarometer study showed that an average 54% across the 36 countries believe that, votes are often or always counted fairly in their country.

Can digital save the day?

New digital tools such as using fingerprints and digital imaging to identify voters is changing the way elections are run in Africa, which may improve the process in the future. 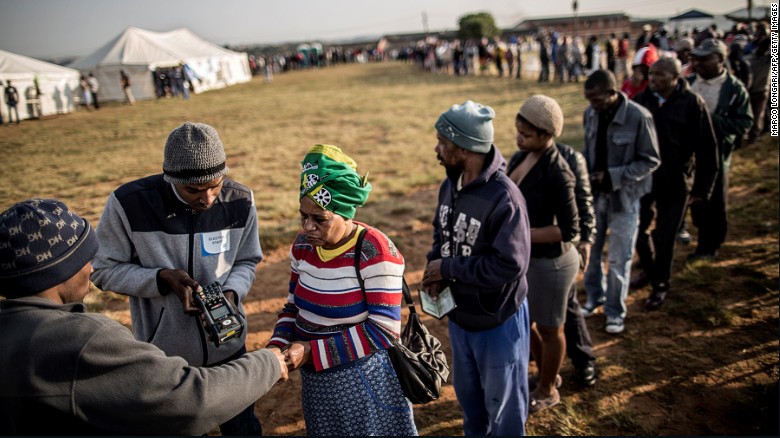 In Namibia, a new system appears to have boosted voters’ trust, Penar says.
“Namibia has invested in an electronic voting system. Interestingly one of the best countries in terms of trust in their election commission is Namibia, at 74%.”
But while new digital tools can make it harder to tamper with votes, they can also create problems as they require electricity and technical know-how at the polling stations, something not to be taken for granted in rural areas, Penar adds.
And while election processes could be improved by storing and counting votes digitally, issues with corruption may remain.
“The servers on which the results data is stored may be owned by a friend of the president or a relative of an election commission. That happens.” The Politics behind the Introduction of Christianity to Africa Letter from Africa: Complaining about colonialism makes us the victims