If Novak Djokovic isn’t back to his best, he is certainly getting closer.

The Serb outlasted his most familiar rival, Rafael Nadal, 6-4 3-6 7-6 (11-9) 3-6 10-8 in a pulsating Wimbledon semifinal to reach a first grand slam final since the 2016 US Open.
At five hours and 15 minutes, it was the second longest Wimbledon semifinal in history.
The longest? It came Friday when Kevin Anderson beat John Isner in six hours, 36 minutes.
Indeed, the 2018 Wimbledon semifinals won’t be forgotten anytime soon. Not the least by Djokovic.
It was also the 12-time grand slam winner’s first victory over Nadal or Roger Federer — the latter two titans combining for 37 majors — since defeating the Spaniard in Rome in May 2016.
He served brilliantly, striking 20 aces, and produced first serves on all five break points he faced in the fifth. Djokovic finally sealed proceedings when Nadal — under pressure serving second in the decider — erred on a forehand wide.
And all this after Djokovic — frustrated in the wake of a tough loss to underdog Marco Cecchinato in the quarterfinals of the French Open last month — had said he wasn’t sure if he would even play Wimbledon.
Getting to the last eight marked progress for the Serb and now he has gone two steps further at an event he has won three times.
Djokovic will be the favorite Sunday against Anderson, too, and not only because he has claimed their last five tussles.
The 6-foot-8 Anderson somehow has to recover physically following his exertions against Isner.
Djokovic’s outing might have leveled the playing field somewhat. He spent 2:54 on court Friday and 2:21 Saturday afternoon as the Duchess of Cambridge, Kate Middleton, and the Duchess of Sussex, Meghan Markle, looked on.
They were on Centre Court to watch the women’s final, which was pushed back due to the duration of Djokovic and Nadal’s marathon.

Anderson and Isner began at 1 p.m. local time but finished at around 8 p.m., meaning a late start for Djokovic and Nadal in their men’s record-extending 52nd clash. Djokovic now leads 27-25.
After Djokovic won the pivotal third set tiebreak — saving three set points — the encounter was suspended at 11:02 p.m. due to Wimbledon’s 11 p.m. curfew. 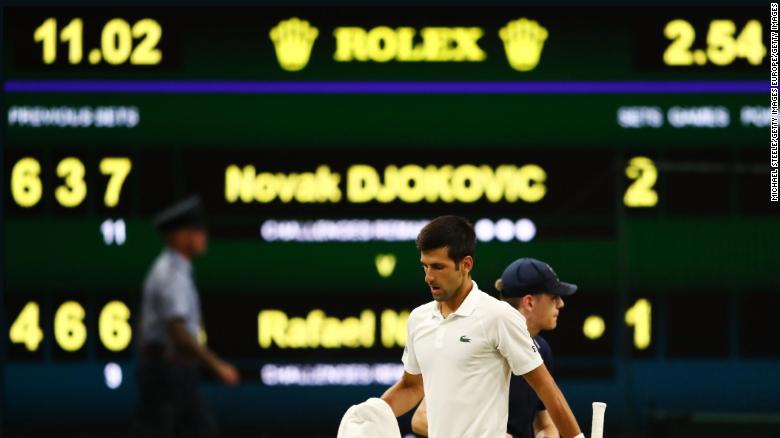 Novak Djokovic took the crucial third set versus Rafael Nadal before play was called for the evening due to Wimbledon’s 11 p.m. local time curfew Friday.
This Wimbledon marked progress for Nadal, going deeper in the tournament since reaching the final in 2011 but, ultimately, he was foiled in his bid for a third French Open-Wimbledon double. 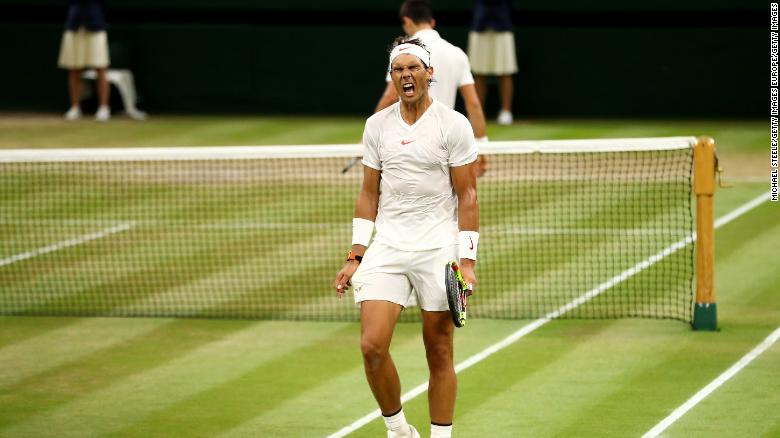 Rafael Nadal failed in his bid to win a third Wimbledon title.
The pair picked up where they left off still under the closed roof, to keep in line with Friday’s conditions.
Nadal fended off two break points in a 16-minute game and with more fizz on his groundstrokes won 10 of 11 points for a 3-0 lead.
He was the crowd favorite before the match started and even more so when he fell behind by two sets to one.
The agile Djokovic broke back but was undone at 3-4. And when he dropped serve, he whacked his feet in frustration with his racket.

His frustration rose in the ensuing game: Nadal escaped from 0-40 to force a fifth.
As many times as they have dueled, it was only their third fifth set. 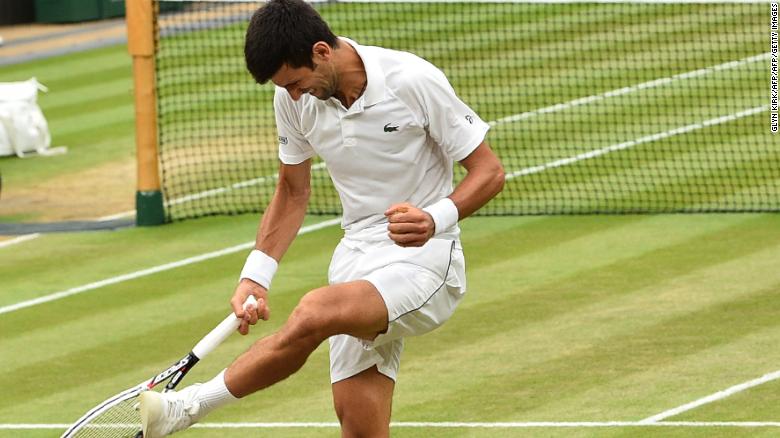 Novak Djokovic was frustrated at times but still beat Rafael Nadal at Wimbledon.
Nadal prevailed 9-7 in the Roland Garros semifinals in 2013, a year after Djokovic bettered Nadal in six hours in the Australian Open final.
The finale witnessed both players serving exquisitely under pressure, especially Djokovic. On the last break point he stared at 7-7, he curled a passing shot past Nadal.
Nadal bravely saved a match point with a drop shot at 7-8 yet at 8-9, 0-40, his forehand went wide to give Djokovic victory.
And a huge one it was for the Serb. No touchline ban for Mourinho after FA charge ‘not proven’