Will More Tourists Come to Egypt? 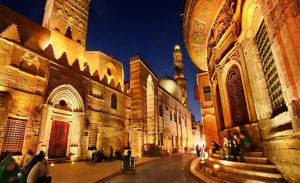 Tourism is a big deal in Egypt and the new law is designed to further strengthen the tourism industry. At present, 12 percent of the Egyptian economy comes from tourism. As news of the new law spreads, more tourists are likely to decide to plan trips to the Northeast African country, which is world-renowned as home to the Sphinx and the Pyramids. According to Reuters.com, Egyptian officials reported that tourism in the nation accelerated by a huge 170 percent from January to July 2017. 3.5 billion Egyptian pounds in tourism-related income was earned during this 7-month time frame.

A Tripadvisor.com review of Khan Al-Khalili, Cairo, by a female traveler warns other tourists to avoid street vendors in the area. The reviewer advises people to avoid making eye contact with the street vendors and to avoid leaving their handbags unattended. Aggressive street vendors in Egypt do have a bad reputation for frightening or annoying tourists. On the flip side, many of these vendors are struggling to make ends meet and to feed their families. One tour guide in Egypt told a Guardian reporter that the new law would target the neediest sector of Egyptian society.

Usually, street vendors are at their busiest near the most popular and beloved Egyptian archeological sites and modern attractions. Examples include the Pyramids of Giza, Luxor’s Karnak Temple (and the Valley of the Kings) and the Egyptian Museum. Now that the new law is in force, tourists may feel a greater sense of safety (and freedom) while they drink in the beauty of Egypt’s most compelling landmarks. Egypt has so much to offer and tourists have the right to see the sights without being pestered. Many feel that this law is long overdue. 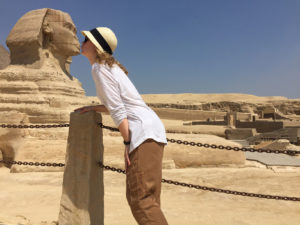 In this Aug. 30, 2015, photo, provided by Courtney Bonnell, Bonnell poses so that she appears to be kissing the Sphinx, which stands in the background, in Giza, Egypt. With Egypt once-thriving tourism industry in decline, visitors face a combination of smaller crowds, eager guides and pushy souvenir sellers. (Courtesy of Courtney Bonnell via AP)

A travel warning to USA citizens interested in visiting Egypt was issued by the U.S. Embassy & Consulate in Egypt during July of 2017. It advised travelers to carefully contemplate the risks of traveling to Egypt, due to concerns about terrorist activities in the nation. In January of 2018, the U.S. Department of State – Bureau of Consular Affairs issued a Level 2 Travel Advisory for Egypt, which recommended exercising caution in the Sinai Peninsula, the Western Desert and border areas of Egypt. The 2018 warning was based on threat assessments related to terrorism and military zones.

To keep tourism strong in the country, Egyptian lawmakers need to make tourists feel more secure. The anti-hectoring law should help. With security concerns and travel warnings in the mix, it’s now more important than ever to offer people who do make the decision to travel to Egypt a safe and welcoming experience.